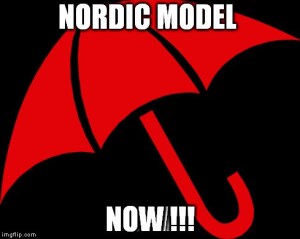 Another man has got away with murdering another prostituted indigenous woman in Canada. Another world away from Australia. The court deemed the fact that he used genital tortue to kill her was not grounds to call the act non-consensual. (She was also so intoxicated as to make consent to sex legally unviable, but that was not considered.)

I am trying to think of any other “job” where one can consent to being murdered. Even under the Geneva convention murder is distinguished from an inevitable outcome of war. This war is different, it is against women, who have done nothing except be women, (and usually impoverished women), to endure or die under this treatment.

Male violence against women is consistently individualized. Particularly in prostitution, it is taken out of context from male violence on a mass scale of rape, torture and murder going on globally and daily. Ironically, there is no such individualizing when we talk about poverty. We talk about it in terms of all people who suffer under it, and this effectively erases the female face. Nods are given to women living and dying in conditions of such horror, but it is the children that (sometimes) matter, or the community, as a whole or the particular men ‘fighting’ it. Everyone suffers.

Women and particularly indigenous women are the most impoverished in the world. Assuming this murdered woman needed money, autonomy and also support and consideration as a human being is not a wild assertion. I am not wrong in assuming that all impoverished and marginalized women need money, autonomy, consideration and support – not a ‘welfare’ card controlling the way we spend our money when it is male violence and poverty that is the root of our problems.

Male violence against women in Australia is euphemistically called , as it is elsewhere, domestic violence. A term which erases the main perpetrators .How can one compare what happened to this woman in Canada with women here? We know male violence crosses all economic and social and racial barriers- the wealthy women in a wealthy suburb are subjected to it as are the poor woman in remote communities. But she was different, she was an indigenous prostituted woman in Canada. What has that to do with us?

A few years ago, and in sickening irony, mining magnate Andrew “Twiggy” Forrest inadvertently mentioned the issue of male violence by speaking about 13 year old girls in indigenous communities in Western Australia “selling themselves” for a cigarette and used that as a platform to launch his own interests. Rip up the earth, provide jobs for some (mainly) blokes, and girls just won’t *do that to themselves any more*. The matter was correctly relegated to poverty, it was also correctly relegated to race. But in a way which obscured the common denominator in creating the violence and poverty. And in a way which obscured the racism. Talking about 13 year old indigenous girls “selling themselves”obscures who buys them and makes white male entitlement invisible. There was, and is, no acknowledgment of who does this to girls and women (men do this to them) . There was no acknowledgment of more than 200 years of ongoing genocide in this country. Certainly, not a word about the prostituted as a class nor the acknowledgement of what the underlying structure of capitalism and male entitlement does to girls and women.

There was no mention of the fact that those who have the money, do (surprise), control those who do not have it.

That those with power, have power.

Indigenous communities quite rightly demanded an apology from Mr. Forrest and his racist assumption that first nations people do not care for their kids. But lost in that was the fact that it is girls and women who suffer primarily under poverty and that being a first nations female means vulnerability to the worst of those committing predatory behavior and violence. Lost was the fact of (mainly) white men buying girls and women for sexual gratification, and male violence within and without the communities. Lost is the fact that some of these men are not “welfare’ recipients and have the money. Whether they buy sex for a cigarette, or $100, they have the means.

There was no acknowledgment that women in prostitution have a mortality rate 40 times higher than women in any other circumstances, and that indigenous girls and women are the people most likely to be prostituted and that THAT matters.

It is an effective silencer of the left to mention male violence against women if the men are first nations men. That helps make it an effective whitewash of white male violence which has riddled, bullet-holed, massacarred, raped tortured and murdered people of this country since invasion/colonisation

We saw the fall out when a few Aunties up north asked for help from the Howard Government when men and young people were acting up. The fall-out was a full-scale, (including army), intervention which resulted in the reinforcement of the unwavering, systemic stealing of children from their arms, to who knows where? The Department of Childrens Services have lost the files on some 8,000 children who are thus just “disappeared”.

Women caring for children receiving ‘basics’ cards and living away from town centres were unable to have *basic* things like cars repaired and were using the bulk of the basic cards value for taxis to get to the nearest shop for staples to feed their kids. Some of these were women who had fled male violence and were establishing lives for themselves and their children. In a cruel blow the basics card left them vulnerable to more male and systemic abuse.

Now we have the reinvention of the “Welfare” card.

It is not unreasonable, in view of more than two centuries of invasion and violence by primarily white men, for any of us to claim that any money first nations people receive should be considered compensation, instead of welfare. But the government instead wants to introduce a type of rationing based on an idea of “life-style choices”. As though belonging to this land is a life-style choice. And, as if selling oneself for a cigarette is a “life style choice” and not predicated on almost incomprehensible trauma, racism, poverty, and the idea of the “inevitability” of prostitution under the reality of male violence and colonisation.

The government wants to introduce a control over what can be bought and where, without considering *who* will continue to be bought. It won’t just be alcohol, (the tax payer is bonkers if they think alcohol will no longer be accessible),it will be girls and women.

In efforts they claim will help women and children by controlling how their money is spent – the government is actually ensuring ongoing male violence, especially in prostitution. Now the idea of the Single-Parent and Unemployment allowance cards is being issued. By parent, they mean mainly women, by unemployed they mean mainly the young – in other words, those most open to exploitation from those who do have cash- men, particularly white men. Alcoholism is a real issue among both those receiving welfare payments and those who are not. However, single mothers are more, not less likely to spend money on food, education, health and homes for their children. That being said, what we also know is that substance abuse is higher among those in prostitution, and often begins as a coping strategy after one has been entered into the sex industry through poverty and lack of financial autonomy. To target a symptom of male violence without tackling male violence is useless. Taking away financial autonomy from the victims places them further in harms way.

The card is also supposedly designed to startle people out of perceived complacency (which is usually trauma based) and get jobs (which are unsustainable or simply do not exist). Where is the government’s action on male violence, prostitution of girls and women, sustainable work opportunities , treatment centres and women’s shelters? Removing the people from the “welfare” cash system, and using the myth of ongoing employment with companies which boom and bust, use workers for brief periods of time to build their infrastructure and discard them, and then talk about raising people out of poverty in a system which makes one sick in the first place, is beyond appalling.

In short, they offer unsustainable options for an already fucked over people. Now the government, wants to take away their cash too.

If the government is claiming to care about violence against women, and men buying alcohol is the menace, then services for women need more funding, not less. Women need autonomy over their resources, not controls. Importantly, support in which women can state their needs clearly, without having their homes or their children ripped away is also essential. Women need a structure that supports , not an ongoing vulnerability to prostitution, but one that acknowledges that male violence and entitlement to buy a “13 year old girl” is, in fact, male violence.

Studies have proved that when women have control over house –hold finances, women are safer, children are safer and better educated, preventable illness is reduced and the environment has been better preserved, or indeed nourished- where ever they are able to do this in the world. The reason prostitution is considered “viable” or “inevitable” due to poverty is because the agent of violence against women is removed from discussion both in the media which influences the general public, and in laws which refuse to name or criminalize the men who (are actually under law) ,or feel entitled, to control over our ability to live without being a commodities.

The prosecutors of the murdered indigenous woman in Canada are launching an appeal. If only such appeals were not necessary. She was an individual person. She was murdered by a man who believed he had a right to buy her for his gratification. The court upheld his right to do so.

There are intricacies and understandings about indigenous people, and women under global capitalism and patriarchy particularly, that are shamefully discarded under law. Women lose under this system the majority of the time- not just in a fifty-fifty type of way, in a 90% way of the type way.

As the current Australian government leader Tony Abbot talks about “life-style choices”, those on the left rightly condemn him, but never quite enough to end the demand for prostituted girls and women. The fact that Twiggy Forrest could mention 13 year old girls “doing prostitution” “to themselves” , without anyone on the left calling him out on this (apart from calling him a racist), shows us where both the right and the left (and the Greens) collude in their determined belief that male domination over women can be consensual.

Individualising the horror that one woman, a real person, endured before she died at the hands of an individual man is an essential and worthy act. But to de-contextualize her murder from poverty, racism and the right of those with power is unacceptable. Men, even poor men, are still in positions of power over the women they buy.

Using individual acts of male violence against women to stop men buying alcohol or gambling, ignores the structure under which women, who in the main do not use money for alcohol or gambling, maintains the ongoing dangerous conditions of the same women . Doing this under the premise that some people “choose” to spend money unwisely, is despicable.

Removing control of money from recipients is a dangerous practice. What the outraged or concerned media and general public call ‘paternalism’ is actually far worse. It is a means to ensure an expanding class of people vulnerable to exploitation. That the majority of the victims are women, indigenous and the young is not just an extreme act of ‘paternalism’, it is an extreme commitment to profit from the abuse of the bodies and lives of those most marginalized, by taking away what limited independence we may have.

5 thoughts on “Cashless Welfare to target Violence Against Women in Australia? Not in my name. Sexist, Racist and Unacceptable”